This was the first (and probably last) summer Angie has decided to teach a round of summer school.   Although she enjoyed the kids she had over the several weeks, she found that she enjoyed much more the option to not teach during her break from the kids.  Right before Angie had to start summer school, I planned a trip up north to Mackinac Island.  The island has a throwback Victorian feel to it, mostly due to the fact that there are no cars allowed on the island.  All transportation is done either by walking, biking or horse-drawn carriage.  It’s really quite nice and the lack of industrial noise makes the downtown area of Mackinac feel more like a theme park’s boardwalk than an island vacation getaway. 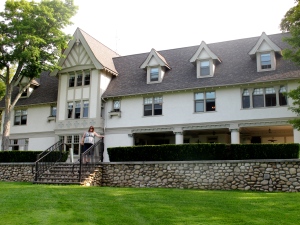 Even the overnight accommodations are designed to take you back to a different era and imagine a time where there was no television and air conditioning.  There are plenty of bed and breakfasts to boot, and some of the homes on the island rent out spare rooms, kind of like you’re in an old world Italian village.  We stayed the night in an old converted mansion, that is now the Inn at Stonecliffe.  It’s on the upper west side of Mackinac Island and can be quite a haul on foot or bike from downtown’s main harbor.  This may sound like a negative, but what we liked about it was that staying here allowed us to be removed  from the hustle and bustle feel of main street.  The really good news is that the Inn, and most of the hotels will send some of their people to pick up your luggage when you arrive at the ferry docks, and take it back to the hotel for you, so you can stay and enjoy the downtown area.  With this being our first trip to Mackinac, we found this allowed us to relax and get right into enjoying the island as soon as we docked.

Touring the island thoroughly will probably take more than the two days we allowed ourselves this time around.  But we did get a lot in during the short time we spent there.  We decided to take a historical tour that took us through the main arteries and shopping area of  downtown Mackinac, up through the state park / forest area, as well as the scenic overlook of the island, which ended at Fort Mackinac.   To the left is the famous Arch Rock that everyone who’s been to the island says you must see when you go.  You can hike to the rock if you choose to, but it’s a steep incline up the cliff, so I recommend to just taking advantage of one of the carriage tours and see this landmark as one of your photo-opp stops.

Here are a few additional photos that will show you a bit of our adventure on the island …. 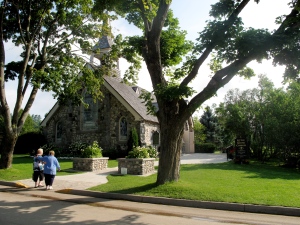 This is Little Stone Church, which is one of the oldest churches on the island.  Even though it is a historical landmark, worship services are still offered each and every Sunday.  Unfortunately none of my pictures from inside the chapel came out well.  There was beautiful stained glass and well-preserved wooden pews that made you feel like you were also a part of the living history.  This church is located across the street from the trading post area, at the bottom of the hill near the gardens of the Grand Hotel. 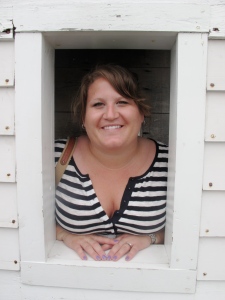 I’m a history lover, so one of my personal favorite stops along the tour was Fort Mackinac.  I took this photo of Angie while she was inside one of the lookout stations, at the front of the fort’s outer wall.  I think Angie would have made a great look-out because she sure is a “looker” … eh?  Am I right?

Along the tour we stopped at what can be best described as a rest stop for the horse-drawn carriage tours.  Here you change carriages,  so that the animals can get a rest and you can buy refreshments and other trinkets that you will swear that you need at the time, but really are just a bunch of touristy crap.  I refrained from buying the Mackinac Island t-shirt and coffee mug, but I couldn’t resist not taking the following photo of Angie and the cigar store Indian.

After our tour ended we grabbed lunch at a colonial themed pub and walked along the harbor.  There were so many beautifully kept homes, historical hotels and b&b’s that I can’t even begin to choose which photos to share.  Next time we visit we will most likely stay at one of the coastal / harbor area b&b’s, so that we can enjoy the nightlife and energy of the downtown area a little more.

All in all, this was a pretty cool getaway for the two of us.  We will go back to Mackinac sometime in the future and plan to spend at least three days or an extended weekend to allow more time to take in the leisure activities available.  Some things we didn’t get to do were ride around the entire island via bike, tour the Grand Hotel, go to church somewhere and take a watercraft lighthouse tour.  These are a few things I want to be sure to do the next time we visit.

I found this hilarious video spoof that somebody made, specifically highlighting Mackinac Island.  You just gotta love “Pure Michigan” …

We've been married for several years now and have found that our adventures are just beginning. This blog is a way we both can share our thoughts, collectively, along the journey.
View all posts by aquilavilla →
This entry was posted in Adventures. Bookmark the permalink.